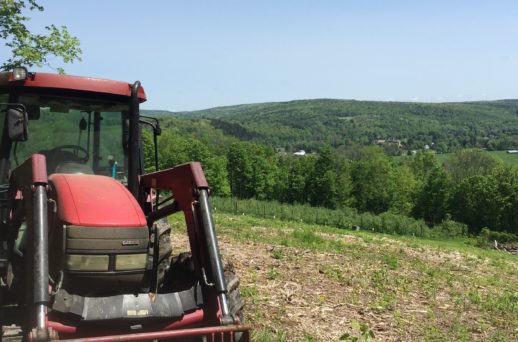 I'm Matt Moser Miller, the new intern here at Eve's Cidery. In addition to working in the orchards and cidery over the coming months, I'll also be taking over some of the farm blog and social media while Autumn is taking her sabbatical year at Forge Cellars (and if you'd like to hear more about Autumn's fascinating work there, check out her Instagram at @myvineyardyear). Curious why someone who's spent their entire working life teaching in academia would sign up for farm work? I get that a lot...

I came home for the holidays in 2015 trying to make sense of where my life was going. I’d spent the previous five years in grad school and with various postgrad writing fellowships. I was newly laid off from my first university teaching gig, unsure if teaching was how I wanted to make a living (and, as I’ll get into later, unsure of whether I could make a living teaching, even at wealthy universities that could afford to compensate fairly if they so chose). So it would be convenient, with all this foreshadowing and uncertainty, to say that when my parents gave me several bottles of Autumn’s Gold 2014 as a Christmas present, a switch was flipped.

But if I’m being honest, it’s more complicated than that. I’d grown up in a rural area, and while my family hadn’t farmed for a living, we’d always farmed for ourselves. As I moved around the country, going to one university after another in increasingly urban locations, I found myself with a deepening interest in agriculture and it’s many problems and obstacles; longing, more and more, for a connection with the land I grew up on. I’d been an avid homebrewer and cider maker for years, but it had only been starting in 2015 that I began really working to learn more about making cider using true cider apples—to think, in a halfhearted way, about what it would mean to try cidermaking as a business. And while it may not be fair to say that that gift of a bottle of Autumn’s Gold sparked my interest in cidermaking, it fundamentally changed my relationship to cider and my interest (now obsession) with the field. This is what I want to make, was all I could think as I tasted it. I want to learn how to make something that tastes this good.

So even as I kept working under contingent teaching contracts a semester at a time, I started putting all that schooling I’d had to work on educating myself about apples and cider. I signed up for grafting workshops; I talked to the few orchardists I knew; I read every book and cider-related paper I could find. And over the past several years, I’ve had the good luck to meet some of the great people working in the cider community, who’ve answered my questions and helped me access some of that hard-to-find proper cider fruit as I experimented and tried to work my way toward understanding how apples transform from the tree to the glass. Through all of that, while I struggled with the uncertainty of the contingent teaching circuit, I knew—I knew—that there was only so much that I could learn through research. Much of learning (in orcharding, but also in food and drink) is experiential, and there’s only so far reading about cidermaking could take me. So when I heard about the opportunity to work at Eve’s, I leapt at the chance to apply.

While this is partly self-interest—the opportunity to learn from people who’d been growing rare varieties and producing great ciders for nearly two decades, whose cider had been formational for my understanding of what the drink could be—there was also a degree of challenge for myself. As romanticized as agriculture can be in some circles, so many of us can forget (or never realize) how hard it can be. Putting myself in a situation where I may need to spend a ten-hour day stripping tree guards or on my hands and knees topworking rootstocks in the hot sun is an important recognition of the costs that come along with this dream of producing high-quality, orchard-based cider. 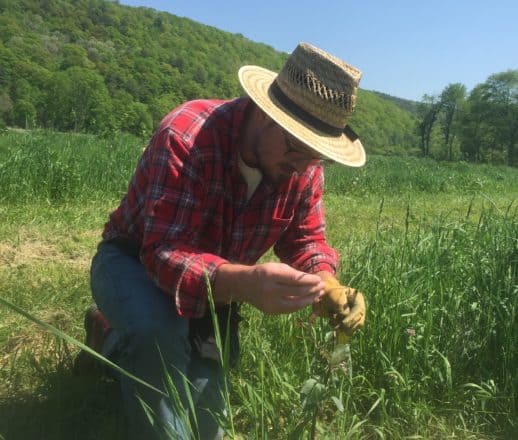 Autumn’s description of some of farming’s in-built challenges—“a field that our society undervalues and under-pays,” with an “unpredictable business partner”—parallels many of my experiences working in higher education. There’s a degree of romanticism about a career in academia, where we imagine it’s all books and deep conversations, a stimulating life of the mind. And there’s some of that, to be sure. But it’s also bureaucracy, and grade disputes, and the constant gnawing uncertainty of whether you’ll have a job at the end of term, and the persistent knowledge that your work isn’t valued enough to be paid a living wage. I’ve joked with people for the past few years that teaching is so unreliable that I’m considering going into agriculture, where success is literally dependent upon the weather. And they laugh, and so do I; but there’s a seriousness that underlies it, and it’s that seriousness that’s brought me to work here at Eve’s.

But there are attractive similarities, too, between the art that drew me to academia and the making of cider. As makers, we control whatever we can; we choose the words, the fruit, the interventions we make, the blend. But underlying all of that illusory authority is the truth that we don't fundamentally control what we make. We work with what we have, and we struggle to make something beautiful from what nature, our training, and our intuition gives us.