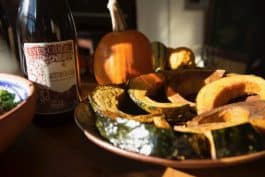 Happy Thanksgiving. Coming together around a table of food and drink for convivial companionship is such a central part of life. Doing this in a spirit of gratitude is something that makes Thanksgiving a special holiday.

This year, we’ve been thinking a lot about the irony of millions of Americans getting ready to celebrate a holiday about the gifts of Native Americans while in North Dakota, peaceful Native American pipeline protesters are being subjected to violence at the hands of law enforcement.

Here is a holiday quote I love from “Thanksgiving It’s true History” by Julia White:

“In your Thanksgivings to come, I would ask that you offer a silent prayer for the spirits of those who were sacrificed so long ago. You and I did not commit those atrocities, and we are certainly not responsible for the behavior of our ancestors be they red, white, black or yellow. However, we are charged with the responsibility of learning our true history, and of having the courage to behave with honor and dignity toward our fellow man. Remember…if the lessons of history are not learned, they will surely repeat themselves. The todays and tomorrows of history are ours to shape. Shape them carefully.”

And yet as I write this on the eve of Thanksgiving day, History seems to repeating its self out in North Dakota. So consider saying a prayer of thanks tomorrow for the bravery of Native Americans who not only have survived genocide but continue to fight for the earth even in the face of greed, violence and racism. And afterward, pass around your iPhone so everyone can make a donation to the Oceti Sakowin Camp https://www.paypal.me/OcetiSakowinCamp

My sister spent some time at Standing Rock earlier in the year, and wrote this brief update on what’s going on and what we can do to help:

“I had the incredible honor of being able to spend a week at Standing Rock, at the Oceti Sakowin (Seven Council Fires) camp in October. It was truly transformative. At the water protector camps—which were led largely by Native elders—I saw a glimpse of what humans have the potential for: water protectors are generous, open hearted, peaceful, prayerful, respectful and maintain a collective goal and community life at the center of daily life. The camps were full of prayer and ceremony. And yet the law enforcement reaction to peaceful water protectors is incredibly violent.

This is the largest gathering of Native American tribes in decades. Hundreds of tribes and thousands of Natives (and their allies) from across the Americas, including from Canada and Latin America, have gathered peacefully and prayerfully to stop this destructive pipeline. The primary message that has come out the resistance camps is the powerful message “Mni Wiconi”—or “Water is Life” in Lakota.

Tribes are concerned about when—not if—the oil pipeline will leak and how it will contaminate the primary source of drinking water for the Standing Rock Sioux Tribe. Energy Transfer Partners originally considered routing the pipeline north of Bismarck, the capital of North Dakota. But the company rejected that route, in part, because of the close proximity to the state capital’s drinking-water wells–and instead decided to route it just up-stream from the Standing Rock Sioux Tribe. The pipeline also cuts across treaty land that should rightfully be the territory of the Standing Rock Sioux—as stated in the 1851 Fort Laramie Treaty. The pipeline crosses and desecrates many of their sacred sites and burial grounds, and the company is—as of today—sitting ready to drill under the sacred Missouri River and Lake Oahe—waiting for the final permission from the Army Corps of Engineers for this final segment in ND. It’s estimated that blocking the pipeline would keep nearly 30 coal-fired power plants worth of CO2 from the atmosphere each year, which would of course help to mitigate the effects of global climate change.

Thanksgiving is a time to give thanks and to share our gratitude. Perhaps we should shift our perspective away from the pilgrims, and interpret it as a time to give thanks to the diverse Native American communities and nations of North America (November is National Native American Heritage month, by the way). Give thanks to Native people for being who they are and for holding on to and defending their cultures against all odds.

Here are a few ideas on how you can take action on Standing Rock and DAPL, over Thanksgiving and beyond:

— Call North Dakota governor Jack Dalrymple at 701-328-2200. Ask him to stop the militarized response to the peaceful water protectors.

—Sign a petition to urge President Obama to stop the pipeline.
http://standwithstandingrock.net/take-action/

— Donate to the School at the resistance camps: https://www.youcaring.com/mn-wi-h-ni-nak-i-i-ow-yawa-675427

← Make Flakey Pie Crust with CalvadosFree Shipping for the Holidays →